Something a little bit different; Overflow plugs for a derbyshire reservoir. I’m hoping to return here one day on a different season and have another go!

The water is carried away down tunnels through the dam to the River Derwent downstream.

These shaft spillways have been nicknamed bellmouth or morning glory – after the flower – spillways.

Importantly, they look pretty cool too.

These plug holes aren’t just about getting rid of excess water – they also create energy.

Severn Trent Water has proudly stated that water released from the reservoir is used to create hydroelectric energy to power its water and sewage treatment works.

You might think the overflows would be the perfect place for this to happen, but the firm said it actually takes place inside the dam, with excess water from pipework passing through two large turbines. 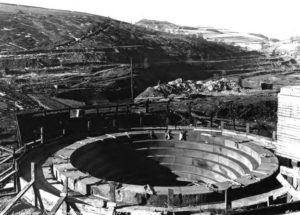