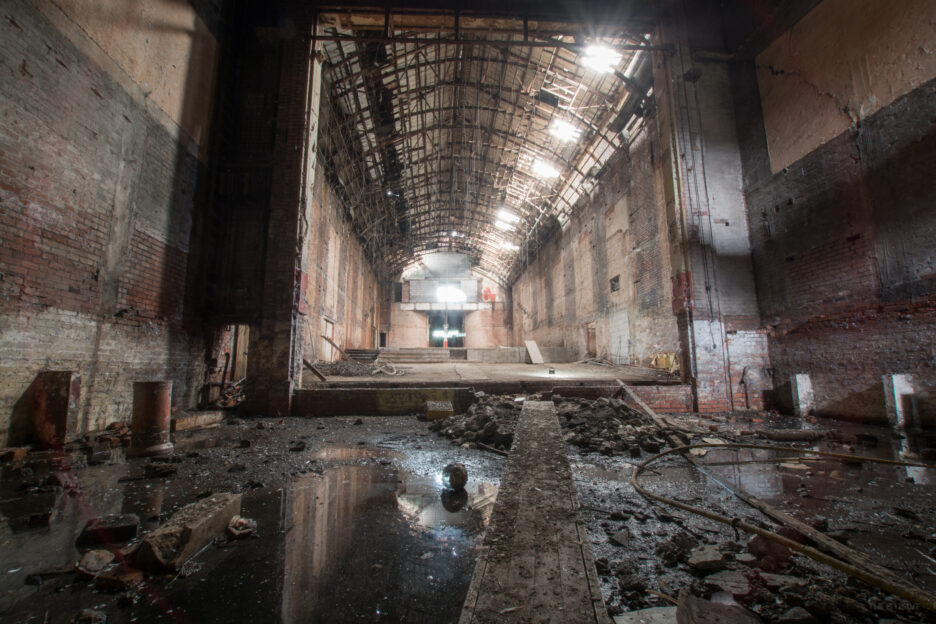 The Sandonia has been many things in its life; I do remember the building open when I was in my teens as a snooker club and has been derelict ever since. Like many older buildings this has an asbestos roof and many features that when built were useful but for todays modern uses is very much defunct.

The Sandonia was designed by Henry T Sandy and partnered up in 1920 with Ernest Bower; They had an office in Stafford until 1922 and built St Patricks church and school down the road but were most known for their works in Birmingham. Other buildings they had created were; St Edward’s Church and St Paul’s Convent Chapel, Selly Park; St. Edward’s Home and St. Gerard’s Hospital, Coleshill; St. Paul’s Schools, Vernon Road, Edgbaston; St. Chad’s Girls’ School, Brearley Street; and the Home for Mentally Deficient Children at Besford Court.

Originally a Kinema and theatre it opened its doors to the public on the 20th of November showing a theatre production of “Chu Chin Chow”. It was used for a film showing the following week.

The Sandonia wasnt really a success for long in any of its uses;

Its closed in 1923 and was sold to Messrs Goodalls and reopened immediately and lasted until around 1930’s it became part of the Stafford Entertainments limited. Its was updated at that time from silent films and had a few decades of being a success. As the technology for showing films changed the Sandonia was updated and in 1957 Robert Wagners ““Between Heaven and Hell” was shown there.

It closed again as cinema some time after than and I believe it was then reopened in 1960 First as an Independent bingo hall and then as a Coral bingo before closing that in the 1969.

The building was starting to suffer by the looks of things’ long before it was the snooker hall this image from Staffordshire Past track showers the state of the foyer.

The Upstairs Foyer at the Sandonia Cinema, Stafford

This photograph of the upstairs foyer of the Sandonia was taken after the Bingo club had left, and the snooker club had just moved in. The colour scheme dates from the cinema’s use as a Bingo Hall and …View Full Resource on Staffordshire Past Track

In 1992 became a Snooker hall. The projectors were removed prior to opening and some time in the 2000 the hall shut its doors and its remained vacant ever since.