Pill boxes where a very important part of Britain’s military history, constructed very crudely these reinforced structures were designed to protect anything the military deemed worthy of protecting. From Bridges, factories, airfields, bases, rivers and coastal regions. Pillboxes vary greatly in size and shape and whilst some people don’t find them all that interesting.. I do! There appears to be no hard and fast rules but the norm for the Type 22 Pillbox, essentially designed for use by riflemen, is to have Loops splayed to the outside. Some of these Loops are sometimes found to be complete pre-fabricated units anything up to two feet square (60 x 60cm) simply inserted into the framework. In other cases the splay is formed by bricks or by shuttering giving a concrete Loophole; often both will have a pre-formed concrete lintel, and some have projecting sills. A further example consists of a stepped splay where pre-formed concrete blocks are 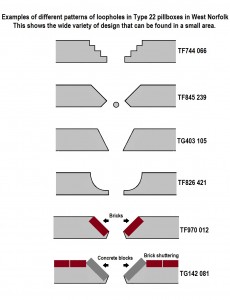 used as one-piece steps.   Loopholes were sometimes furnished with flip-up shutters of wood or asbestos, or with steel shutters pivoting vertically. The provision for the rifleman to rest his elbow and ammunition clip is usually a wooden shelf mounted on iron bars built into the wall a little below the Loophole. Some of these shelves were hinged.   However, many Type 22 Pillboxes are so crudely built that Loopholes are little more than holes in the wall, wider on the outside than on the inside.

Hexagonal pillbox at ground level (mainly filled in). It was part of RAF Brattons’ defences and despite what the link says I beg to differ that this is in “good condtion” …  This is Confirmed as a type 22..

Near Colwich at Wolseley Bridge by the junction of the A513 and the A51 roads on the crossing point of River Trent stands a variant on the type 26 pillbox. This view shows the front. SK019203

a substantial strongpoint near the watch office”. It was not built to a standard design. Like many others it is hexagonal in shape with embrasures in each face but the internal anti-ricochet wall supported a light anti-aircraft machine gun position on the roof.

The ROF type is a bespoke design only found at Royal Ordnance depots and factories. It is a small square pillbox with distinctive long narrow embrasures in each wall. The door is low and usually covered by a porch with a slightly angled roof. The long narrow embrasure serves well as an observation slit but not as well as a firing port, this suggests the main function of this type was as an observation and guard post with a secondary role of defensive position in the event of an attack. At some ROF sites the narrow embrasure is replaced by a more standard rifle embrasure and at Norton Fitzwarren AA positions have been added to the roof. The walls are about 8ft long but the size of this type varies slightly across the country.

This pill box was designed to guard ammunition storage and is situated next to a railway line in wiltshire.