I first read about this place a few years ago and for some reason or other I have never got here until now. To some this wouldnt really be all that appealing but if Im brutally honest I like most things underground! 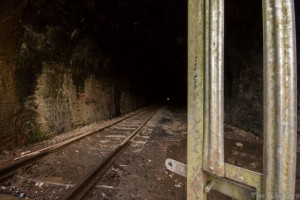 Although built for two tracksthe route was singled, Despite this limitation, the period following nationalisation brought a significant increase in freight traffic, reaching a peak of 10,000 tonnes per week in 1962/3. By this time, passenger services had ended but mineral traffic continued to use the line until the closure of  the local Colliery in December 1998.

The tunnel  follows a straight course and extends for 684 yards. A single track still runs through it but the section between the tunnel and former station site was lifted in 2009.

The eastern approach cutting has gently graded sides and is relatively shallow. At its end is a plain portal, built in engineering brick, featuring buttresses either side of the entrance and masonry copings with some brickwork detailing beneath. Seven ties bars have been inserted into the six brick ring faces, secured by pattress plates. These are dated 1996.

Inside, the lining is constructed in red brick. The butt joints between the lengths are unusually pronounced possibly due to penetrating water washing away the accumulated soot around them. There are several areas of spalled brickwork, some of which have undergone patch repairs. Refuges are provided but are few in number.

Some considerable mineral deposits have formed, mostly on the south wall, as a result of water ingress. A number of weep pipes relieve pressure behind the lining. A drain runs down the tunnel’s centreline charged by three open catchpits.

A single 9-foot diameter ventilation shaft, also lined in brick, is located around 450 yards from the eastern entrance. The surface structure is intact, standing in a field.