Finally got to see this place! It didint dissapoint either. Albeit a little on the muddy side leading up to it this place is bigger than it looks and has plenty of features to take in. 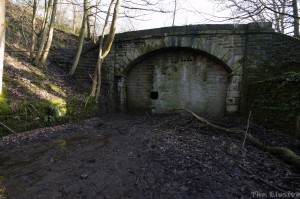 In accommodating the Midland Railway’s Rowsley-Buxton line through his estate, the Duke of Rutland laid down that the railway must not be visible from his seat at Haddon Hall. This condition gave rise to a 1,058-yard tunnel (structure No.48), comprising a central bored section of 350 yards, with covered ways at both ends. It ascends throughout on a gradient of 1:102 towards Buxton and the most northerly 200 yards incorporate a curve to the east of 40 chains radius. The southern approach cutting features a similar curve, extending into the tunnel by around 40 yards.

Work on the bored section got underway in September 1860 with the sinking of a central shaft; seven months later, with the heading complete, four working faces were opened to allow the excavation to progress. This section comprises vertical side walls built from locally-quarried sandstone and an arch of five or six brick rings.

The covered ways’ side walls are identical in form but are supported by buttresses at the south end where the ground is not sufficient to counteract the thrust of the arch. Two profiles of arch are used – one having a rise of 6 feet above springing level whilst the other is semicircular and used where the cutting is deepest. Both are built in stone and 2 feet thick. Abutting the tunnel, a brick arch was turned.

The stratum traversed throughout was shale overlying the local limestone, with a varying thickness of clay on the surface. This created challenging conditions and a number of landslips occurred. On 2nd July 1861, four men were killed outright and a fifth succumbed to his injuries the following day when a length of arch collapsed on top of them. Another man lost his life the following September when he fell and was run over by wagons.

Structural work on the tunnel was finished early in 1862; by April, only a section of permanent way was outstanding. Hassop Station became the temporary terminus of the line when the section through the tunnel was opened on 1st August 1862. The full branch into Buxton was officially inaugurated in May 1863.

The south portal is stone-built and features attractive curved wing walls. Beyond it, the tunnel incorporates a low arch which is no more than 5 feet below ground for the first 300 yards. A ‘shaft’ is located 110 yards from the entrance but is only the thickness of the lining. 79 yards of high arch follows incorporating Shaft No.2 – 10 feet deep – beyond which is 54 yards of low arch.

Shaft No.3 marked the start of the 440-yard brick-arched portion within which was the bored tunnel. Two more shafts are encountered – one 30 feet and the other 6 feet – before a final change of profile. Immediately beyond this is the site of the fatal accident in July 1861. The remaining 200-yard section of low arch leads around the curve to the north portal which is similar in design to that at the south end although the approach cutting is somewhat deeper. A retaining wall is built on the west side, along the top of which a siding was laid for 33 wagons. At its north end was Haddon signal box, opened in 1889.

The shafts were located so as to ensure that the sections of high arch did not act as smoke traps. In 1900, a scheme was approved to enlarge Shaft No.3, removing three lengths of arch to form an open box, effectively splitting the tunnel in two. Its substantial concrete walls – more than 8 feet thick at their base – are faced with blue brindles. In 1923, plans were developed to insert a timber lining into Shaft No.4 although there is no evidence today of the work having taken place.

Built into the side walls are numerous tall, narrow recesses – generally about 30 yards apart – that presumably provided somewhere for the local lengthman to stand when a train approached. Whilst these seem likely to have been inserted during construction, 1914 saw more conventionally proportioned refuges – built from engineering brick – added at 22-yard centres on alternating sides. Hundreds of brackets for signalling cables remains fixed high on the west wall.

A 9-inch drain runs down the tunnel’s centreline, accessed via catchpits at 50-yard centres. These measure 3′ x 2′ x 2′ and would have been capped with timbers during the line’s period of operation. Most are now unprotected. Small openings in the east wall allow two springs to flow into the tunnel. For 100 yards, the section running north of the open box suffers from severely spalled brickwork at the haunches. The cause of this is thought to be a broken field drain, resulting in water ingress and associated freeze/thaw action. Standing water collects as far as Shaft No.4.

The last train passed through the tunnel on the evening of Saturday 29th June 1968, travelling towards Matlock. Since then, the entrances have been bricked-up and nature allowed to take its course. Substantively, the tunnel remains in very reasonable condition with the exception of the spalled brickwork.

In 2011 plans were developed to incorporate the tunnel into an extension of the Monsal Trail, following an agreement with the Haddon Estate. This will involve the laying of a 3-metre wide bitmac path – mostly along the west side of the structure – and the installation of LED lighting. Remedial work will take place on the brickwork and clear plastic domes added to the two northern shafts, helping to stabilise temperatures. All this work is subject to the granting of planning permission and securing of the necessary funds.