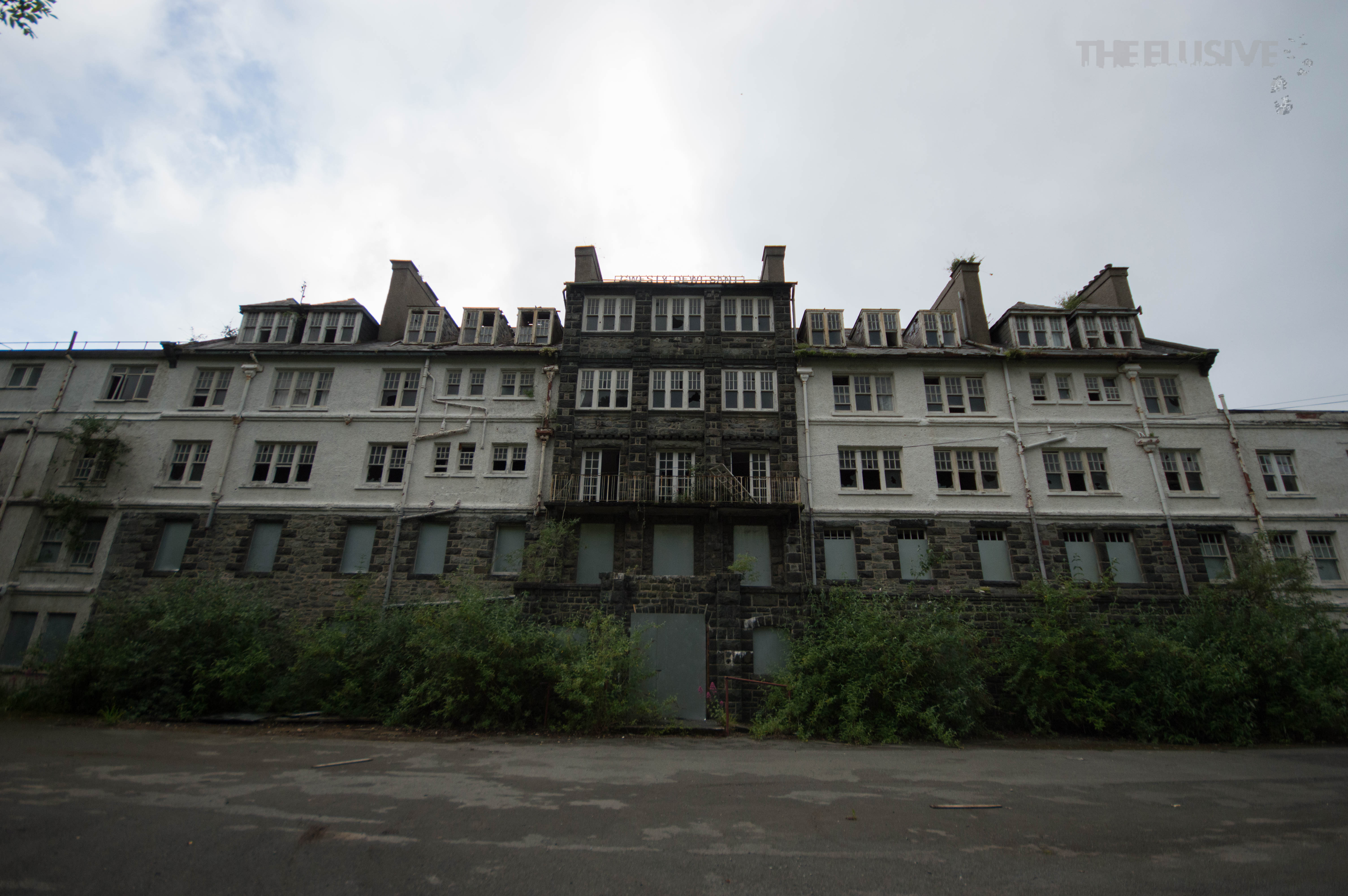 Whilst on holiday I drove past this hulk of a ruin a few times, Staring at its bare bones existence you don’t need much imagination to see how grand the place would have been once. I was going to call this place drop death hotel, as with its height and current state it really isn’t a safe place to look at, very dangerous!

The Hotel is based on proposals drawn-up in January 1907 by George Walton (Architect), a Glasgow School architect and contemporary of Charles Rennie Mackintosh. The proposals were subsequently revised in 1908, and the hotel was built in 1910.

The Hotel has five storeys and a basement. The height of the Hotel was disguised by having the upper three floors included in a giant mansard with rows of dormers. The Hotel reflects skilled craftsmanship, in the handling of materials and detail, that echoes Walton’s earlier design for Wern Fawr . Wern Fawr has been described as being “at the apex of building craft” and the Hotel has been described as Walton “at his most professional”. At the hotel, Walton provided solutions to a challenging commercial design brief that included the traditional use of heavy masonry on the exterior of the Hotel, which was intended to reflect the use of this material in the locality. In conjunction with this, Walton used reinforced concrete to open-up the interiors in order to simplify structural problems, make the most of the sea views, and give the interior “a cheerfulness which could survive even a dull  day”.

The Hotel sits on the edge of the a Conservation Area The exterior design responds to the character of the more traditional buildings nearby, because of its use of stone and traditional form. Walton also designed all the fixtures and fittings for the Hotel, including fitted furniture, carpets, tables, chairs, settees and ironmongery, working to a tight budget.

The Hotel was built for a syndicate, in which George Walton was involved, and catered primarily for golfers visiting the adjacent Golf Club. The Hotel has been used by generations of golfers and other visitors, who retain fond memories. The Hotel had 60 bedrooms and served traditional home-cooked food, facilities included an early twentieth-century lift (elevator), a snooker table, an outdoor pool, and a solarium.

In 1922, a devastating fire destroyed the interior of the Hotel, so that Walton’s original design commission has been lost. The Hotel was then rebuilt hurriedly by Griffith Morris. The three bay centre is now flanked by two storeys of stone, two of roughcast and the attic only is mansarded. The centre has also been altered on the top two floors and has a ground floor addition. It is unclear from the records how much of the original interior structure has survived. The later, low quality, extensions have diminished the grand aspect of Walton’s original structure. Despite this, the Hotel is retained in a listing description, which is a Grade II*Listed Building, and this suggests that the Hotel was notable due to its group value.

The Hotel closed in 2008[and became subject to planning application which was lodged with the Local Authority for the following proposal: “Full application for demolition of hotel  and construction of a new 130 bedroom hotel and 76 holiday apartments, formation of new internal road layout, landscaping and associated engineering works.” The proposals for the site were reviewed in October 2006 and subsequent comments were made in November 2006 and January 2007, in response to design revisions. On 17 December 2008, the DCW issued a Design Review Report which concluded, inter alia, that the replacement hotel complex would be an “overdevelopment of the site”. Planning Application  was heard, and approved. The Design Review Report of the DCW notes that: “there has been very little community response” to the proposed demolition of the Hotel.