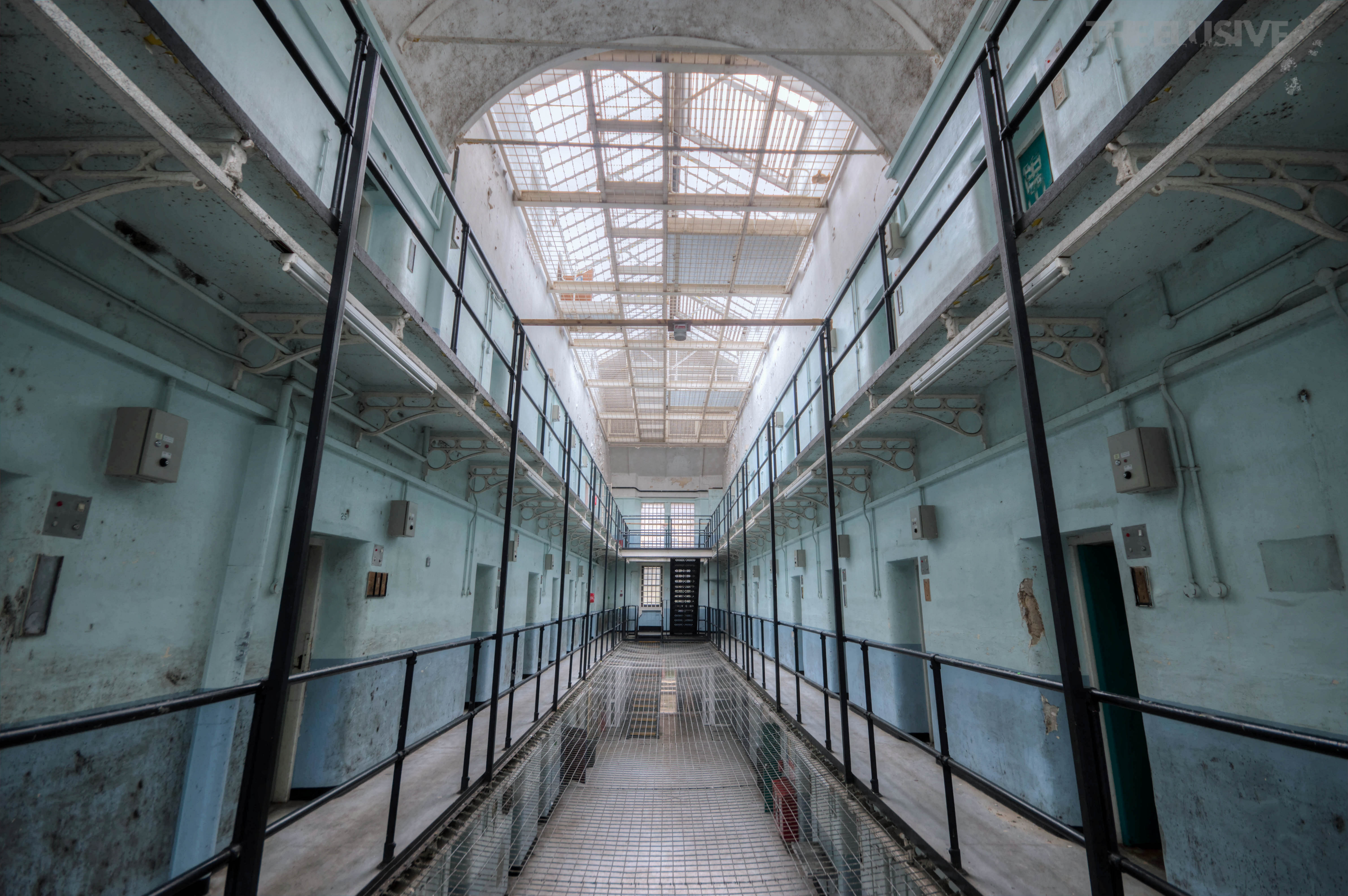 Shepton Mallet prison was built in 1610 and is the country’s oldest jail. It is a grim stone structure and is still operational. It housed French prisoners of war during the Napoleonic Wars and during World War II, Cell 10 was used to protect some of the nations treasures including the Doomsday Book, a copy of the Magna Carta and the logs of Nelson‘s Flagship, HMS Victory.

It was the place of execution for the county of Somerset from 1889, having taken over from Taunton, and civilian executions took place there up to 1926. These were :
Samuel Rylands who suffered on the 13th March 1889 for the murder of a little girl, the first to be hanged here.
A little over two years later, on the 15th December 1891 Henry Dainton was hanged for the murder of his wife at Bath.
Charles Squires was executed on the 10th of August 1893 for killing a child.
A further four men hanged there in the years 1914 – 1926. The first of these executions was that of Henry Quarterly on Tuesday the 10th of November 1914 for shooting dead his neighbour, Henry Pugsley. Thomas Pierrepoint officiated at his hanging. Verney Asser followed Quarterly to the gallows on Tuesday the 5th of March 1918. Asser was an Australian soldier stationed at Sutton Veney during World War I, who had shot a fellow soldier, Acting Corporal Joseph Durkin. He was tried at Devizes in Wiltshire in January 1918 and subsequently hanged by John Ellis, assisted by William Willis.
Robert Baxter hanged William Bignall on the morning of Tuesday the 24th of February 1925 for the murder of his girlfriend Margaret Legg.
On Tuesday the 2nd of March 1926 the last civilian execution took place at Shepton Mallet when Tom Pierrepoint hanged John Lincoln for the murder of Edward Richards at Trowbridge in Wiltshire.

Shepton Mallet as an American Military prison during World War II.
During World War II part of the prison was taken over by the American government for use as a military prison and as the place of execution for American servicemen convicted under the provisions of the Visiting Forces Act (1942) which allowed for American Military justice to be enacted on British soil. To enable these executions to take place a new brick built extension was added to one of the prison’s wings. The two story red brick structure looks totally out of place against the weathered stone walls of the original building. A new British style gallows was installed on the first floor of the building and two cells within the main building converted into a condemned cell.

18 military executions were carried out at Shepton Mallet, representing 17% of the 96 executions of American servicemen serving in the European and North African Theatres of Operations (ETO). (Figures of 19 and even 21 executions in the UK have been given in some accounts but are definitely not correct.) Of these 18 men, nine were convicted of murder, six of rape and three of both crimes. Their racial mix was : ten African American, three Latino and five white – their average age was 21.5 years. 17 were Privates and one was a Corporal. None ranked higher than this.
Much has been made of the ethnic background of these men but very little of what they were convicted of. Also much is made of the alleged poor quality of the trials that these men received. In at least two cases, men had their death sentences commuted. (Thomas Bell who had been convicted of rape and George Fowler see below).

Bear in mind that a conviction for murder in Britain at this time carried a mandatory death sentence and that it was not unusual for civilian murder trials to only take a day or two. Rape did not carry the death penalty in British law but did in US Military law. Execution by shooting was not permitted for murder in Britain but was under US Military law. Rape was punishable by death in most of the southern states of America and in fact the last execution for rape in the USA took place in May 1964 when Ronald Wolfe was gassed in Missouri. Just over 300 rape executions (where the victim lived) were carried out between 1941 and 1964.

The normal U.S. Army method of hanging was not permitted in England and this was confirmed by Albert Pierrepoint, in his autobiography. Most of the normal American execution customs were allowed however. Executions by hanging were normally carried out at 1.00 a.m. in the morning of the specified day. (Shooting executions were carried out around 8.00 a.m.) The British method of hanging was used, there was no standard drop and no hangmen’s coiled noose, but an exactly calculated drop using a British style eyelet noose.
US Army regulations laid down that a condemned prisoner at execution “will be dressed in regulation uniform from which all decorations, insignia, or other evidence of membership therein have been removed. Likewise, no such evidences will appear on any clothing used in burial.” In all cases the condemned men had the services of the prison chaplain in the days leading up to their execution. They were housed in a condemned cell adjacent to the execution chamber for the last three or four days of their lives.
Records of these hangings indicate that the time between releasing the trap doors and confirmation of death varied considerably. David Cobb’s execution took only 3 1/2 minutes until he was officially pronounced dead by three U.S. medical officers. (He was left hanging for one hour, as was the norm in England). It took 22 minutes before George Smith could be certified dead. The average time for 15 of the 16 hangings was 14.8 minutes. (The data is not available for one hanging). It is presumed that the time was taken from the drop until no further heartbeat could be detected by the attending medical officer. This would tally with the time it took for the heartbeat to stop in civilian hangings at the time.

Albert Pierrepoint commented adversely upon the delay caused to the execution process caused by the reading of the death warrant on the gallows and allowing the condemned man to make a final statement. Neither of these things were allowed in British executions but were standard practice in American ones. Typically there were up to 20 witnesses and officials in the execution chamber. After execution the bodies were buried in Brookwood Cemetery in Surrey. Many were later re-buried in France.