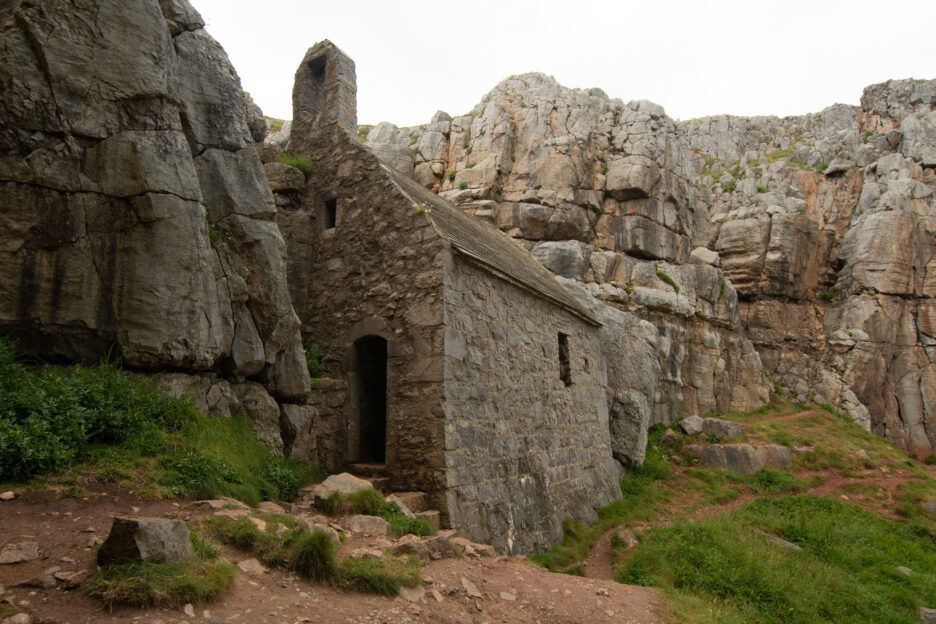 Saint Govan (Welsh: Gofan) (died 586) was a hermit who lived in a fissure on the side of coastal cliff near Bosherston, in the Pembrokeshire Coast National Park, Wales. St. Govan’s Chapel was built in the fissure in the 14th century on what is now known as St. Govan’s Head.

One story says Govan was an Irish monk who travelled to Wales late in life to seek the friends and family of the abbot who had trained him, variously identified as Saint David or Saint Ailbe of Emly. Another story identifies Govan with Gawain, one of King Arthur’s Knights of the Round Table; another that he was originally a thief.

Govan was set upon by pirates, from Ireland or the nearby Lundy Island. The cliff opened up and left a fissure just big enough for him to hide in until the pirates left. In gratitude, he decided to stay on along the cliff, probably to help warn the locals of the impending pirate attack if they were to return.

St Govan lived within a small cave in the fissure of the cliff. This is now reached by a long flight of stone steps, the number of which is said to vary depending on whether one is ascending or descending.

The present small vaulted chapel of local limestone was built over the cave and dates from the 13th century although the site may have been of monastic importance since the 5th century. St Govan may be identified with Sir Gawain, one of King Arthur’s knights, who entered into a state of retreat in his later years. Originally St Govan caught fish and took water from two nearby springs. Both are now dry; one was where the medieval chapel now stands, the other, which was lower down the cliff, later became a holy well. A legend says St Govan’s hand prints are imprinted on the floor of his cave and his body is buried under the chapel’s altar. The cave was once a popular place for making wishes.