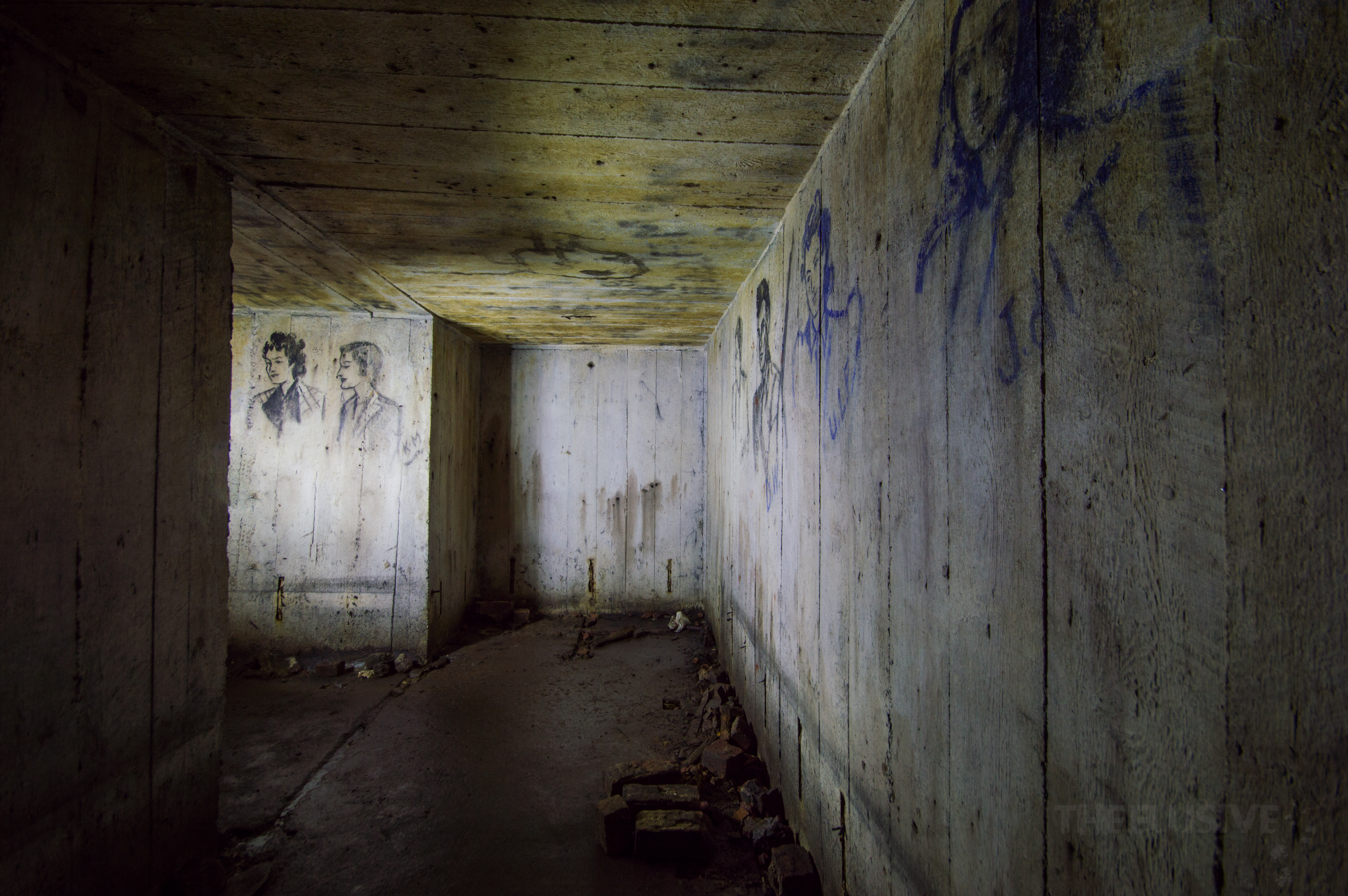 Underground locations are very special to me they are places that normally have an element of military in them or industrial but hardly ever the personal! This location has been in my research for years and its very unique in which the 70 odd year old portraits are such a beautiful site and remainder of the personal aspect of wartimes.

Im quite lucky to have developed friendships with other like minded souls including another explorer called Blacksnake whose given me a wealth of information in regards to the air raid shelter and its history, Thanks mate !

Where there was space on a factory building site, an external shelter was likely to be the favoured solution, reducing the likelihood of the staff air raid shelter being crushed by the building above collapsing on it or the escape route being blocked by post-impact debris. At the Littlewoods site in Edge Hill, the shelter was built at the eastern edge of Wavertree Park and was aligned parallel to the factory building to allow rapid filling via several gateways. The factory itself is an attractive 1938 art deco building, which surprisingly for its date was not built with an integral heavily protected basement shelter. Littlewoods was one of the most famous shopping catalogue companies formed in 1928, though like many factories its production was turned over the military ends during the Second World War. It was then used for various activities in support of the war effort, including printing National Registration forms (on the outbreak of war 17 million were printed here over 3 days), assembling the floors of Halifax bombers, and by the code breakers of MC5, the government office that intercepted mail to and from suspected enemy agents.

Merseyside was the second most heavily bombed part of Britain after London, and its air raid shelters would have seen a great deal of use during alerts and raids. The Littlewoods shelter is approximately 300m long, aligned on a northerly axis parallel to the Littlewoods building. In plan it resembles a chain of rectangles (with pairs of shelter chambers roughly 12m and 9m long along the four sides) joined by 9m long corridor galleries. It had 13 entrances evenly disposed along its length to facilitate filling from the west side of the factory – these sloping entrance passages joined the connecting corridor galleries at right angles giving excellent blast protection. The shelter was semi-buried using a cut and fill method with earth banked on top of it for bomb splinter protection, and may have begun as a Munich crisis trench rapidly dug during a few tense weeks in September 1938. Many of these were then lined with precast concrete wall and roof panels which were slotted together to give a degree of dryness and an illusion of permanence. Littlewood’s shelter though is built with much stronger reinforced concrete and the clean timber board marks indicate higher quality and more expensive construction than normal. The shelter appears on a 1940 map. 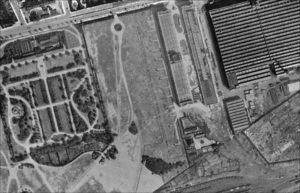 Its great treasure though is the remarkable series of portraits of men and women at the south end. Several wear helmets and their quality suggests that they may have been painted from life, perhaps to entertain the occupants during the tedious wait for the All Clear. There are men and women, and one portrait even appears to cleverly work round a pre-existing stain on the concrete surface. These appear to be the work of one artist, maybe even one of the MC5 experts since graphic skills were used by MC5 to adjust and add false information to letters before sending them on. It is likely that they are sketches of co-workers at the factory, and some individuals are identified by their initials. Most are of women, while the men shown are either in uniform or middle aged, one appearing with a bow tie and one with a pipe. 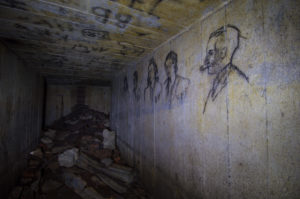 Elsewhere cigarette lighter writing on the ceiling indicates the dates 1942 and 1943, after the main blitz and before V1 attacks, in the era of occasional one-off raids. Otherwise signage is limited to black stencilled bay numbers and “Turn Right and Duck” signs. 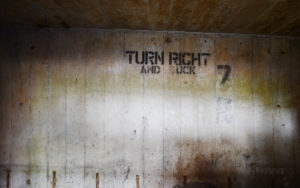 There would have been benches, and shadows and fixings along the walls showed where they would have been fixed on both sides. Pairs of empty toilet cubicles were provided in short offshoots off the shelter chambers., though today all of the shelter’s Elsan chemical toilets have been gathered together in one pile, possibly with the intention of collecting them at some stage.

Information supplied by the late Chris Rayner; a fabulous gentleman who was a wealth of knowledge and is sorely missed in the community!

The general belief is artist or artists was part of MI (military intelligence) stationed in building doing propaganda posters and such like;  that’s kind of supported by the subbrit insert. The reason they’re only in bay 5 is that everyone was assigned specific bays to aid a quick duck and cover during an air raid. Hence the Turn Right and Duck on entrance wall! I did think it was odd as there was no left ones!