Finally got round to seeing this place, its been abandoned a long time and I have made the journey to see this place before to no avail. It is pretty small and very decayed but i still really enjoyed the visit!

The estate of Pool Park, or as it is sometimes spelt, Pool Parc, has been around a long, long time and was originally one of several deer parks where the owners of nearby Ruthin Castle could hunt. In the 1500s the Salesbury family bought the estate and divided it in two, one half remaining with the father William Salesbury, and the other part going to his son and heir Charles. Charles died with no male heir so his line stopped. The original house and the estate then passed into the Bagot family when Charles’ daughter married Sir Walter Bagot.

In 1862 the original house on the estate was re-built in a mock Tudor, half timbered style. No expense was spared on the interior where elaborate wood panelling graces the rooms and corridors and a magnificent oak staircase, complete with ornamental wood carvings, sweeps majestically down two flights of stairs mirrored left and right, into the grand entrance hall. The staircase is said to have originally come from a former bishop’s residence called Clocaenog.

Whilst still remaining in the family’s ownership the house was not actually lived in by the Bagots throughout much of the 1800s and then in 1928 they lost it all, lock, stock and barrel, on a bet at the races!

In order to make the sale of the estate quick and easy the land was split into lots but a Llanwrst timber merchant got the lion’s share, subsequently felling and selling much of the timber from the surrounding forest. The house was not sold but was eventually leased to Sir Henry Tate of Tate & Lyle’s sugar fame. 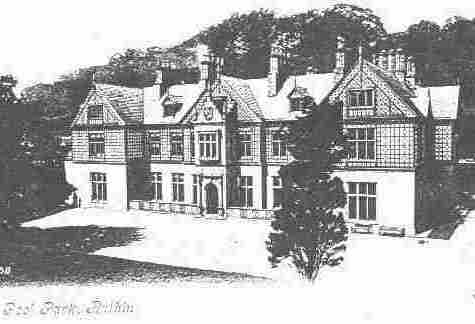 In the mid 1930’s Pool Park was bought by the local health authority with the intention of converting it into a convalescent home for 80 male patients, and then during the war this was increased to 120. A prisoner of war camp was also built in the grounds!

In 1949 the house became a mental hospital to take some of the pressure off nearby Denbigh Asylum which was by now creaking at the seams. At this point female patients began to be treated as well. During the late 60s and early 70s mental asylums in the UK were progressively closed and Pool Park was no exception, finally closing it’s doors in 1989.

The house was sold in 1992 but whatever was planned for it does not seem to be happening and now sadly anything of value within the building is rapidly being stripped out, presumably for re-sale. In view of the fact that this is a Grade II listed building I would have thought that the stripping of the interior in this fashion was actually illegal but then I’m not at all well versed in building/architectural law etc. What is without a doubt however is the fact that within the space of just one year the upper floor has gone from being in a reasonably sound state to a jumble of heart breaking water induced decay – previously intact wooden flooring in the corridors and rooms is now a mess of rotten boards and fallen plaster with holes appearing through to the floors below. The kitchen wing has all but lost it’s ceilings and is an almighty mess, and the magnificent staircase which was such an impressive feature of this house, is now being stripped of all it’s ornate wooden carvings and even the posts and hand rails. The old steel central heating pipes are sawn through and the cast iron rads are almost all gone. Few windows survive intact now and I could not find the famous inscription naming the original builder in the entrance hallway.